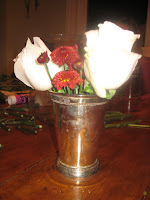 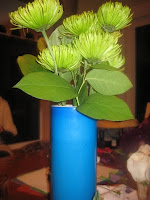 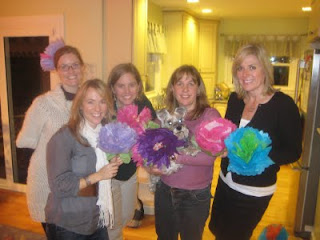 Our Flower Arranging "teacher" advertised on Craigslist as "Practically Martha," claiming that she culled Martha Stewart's site for great ideas and tips and then simplified them so that "normal" people could entertain in Martha Stewart style. Because she was not coming to Amy's house until 8:00pm and because it was a week night, we did the dinner and drinks portion of the evening first -- at The Lost Dog Cafe in Arlington.

(NOTE: The next section is for mature audiences only. Meaning not for any of our readers...)

At the Lost Dog, Dilettante Amanda was ordering a beer and said to our waiter "I will have an Old Chub" and I (predictably) commented, "Just like in college." (We followed that up by saying to our waiter that we bet he had not heard that one before and that we wondered if the brewery was aware that the beer name was a double entendre.)

Right after that, Nicole ordered a sandwich called "The Fatty." It all seemed so phallic that when it was my turn to order, I told the waiter that I'd like "The Girth Monster." From that point on, every single thing we said to the waiter and everything he said to us had sexual undertones. To wit:

Waiter: "Are you done with your plate?"
Me: "No. I'm not finished. It takes me a long time to finish."
Waiter: "Well, take your time. I want you to be satisfied."

Amy: "Can I get some horseradish sauce for my onion rings?"
Waiter: "You really like the white sauce, don't you?"

We hope he enjoyed getting a big tip. >smirk<

From there, we drove to Amy's house where "Practically Martha" was meeting us for the activity.

Prior to the class, this woman had asked us each to bring two containers in which we could create a floral arrangement, so we had some pretty reasonable (we thought) expectations about how many flowers she was going to bring, and were also assuming that we'd be heading home with two floral arrangements each.

But...she only brought two tiny bunches of flowers and selected two containers from the eight that we had provided, and then proceeded to cut the stems and stick them into the containers in the exact arrangement in which she had bought them. (See photos above.) She added nothing. Except the suggestion that we might want to consider adding foil-wrapped chocolates into the bottom of the clear vase. What?

That part of the demonstration lasted about 15 minutes, and then she moved on to teaching us how to make paper flowers...all the while (kiddingly?) telling us that we were terrible at this and were probably not ready to move on to the more advanced flowers. Apparently, she did not fully appreciate Amanda's Greek key foliage pattern, which was rather inspired (by the Old Chub, most likely). And then telling us that "she was awesome" at paper flower making.

So...we spent $25 to sit there and get criticized. (If I wanted that, I would've just met my mom for a drink.)

She brought along some ModgePodge (TM), ribbon and a paintbrush, yet these never appeared during our class. When asked, she told us about all the cool stuff we could have done with these items.  (Again...what?)

Perhaps she was "Practically Martha" in her condescending attitude. Other than that...we failed to see much similarity to the entertaining goddess.

Overall, we'd give this activity (as well as Dilettante Amanda's creations) a big, fat "F".
Posted by Brutalism at 2:32 PM

I am an Amazon. When did I become two feet taller than the other Dilettantes?

wow. probably better that you got to drink first.
Cathleen (not Kathleen)