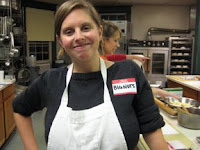 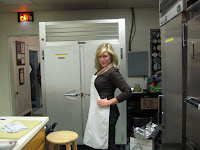 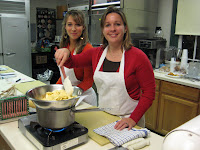 Description on Web site: Class provides on instruction on "holiday gifts to give from your kitchen to their table" -- including peppermint bark, ginger snaps, cranberry caramel sauce and pecan shortbread bars.

Well, because this was a school night, we all decided to meet prior to class for dinner and drinks, rather than going out after. Perhaps not the best idea in hindsight.

Dinner was at Black's in Bethesda. Cool place -- and good food. Amanda and Nicole brought us dilettante Christmas gifts (Amanda a Kiva gift certificate and "D" ornament and Nicole adult MadLibs). Much hilarity ensued -- mostly from us, but also due in large part to our waiter who pronounced the Dogfish Head Raison d'etre beer as "raison day etray". Interesting.

We got to L'Academie a few minutes after the class had officially begun (it was a bit of a hike from Black's) and should have known we were in trouble when every last one of us giggled over a sign outside the instruction room that said, "bring a stool in with you" -- and then one of us erased the "a" so it read simply, "bring stool in with you." (Gentle reader, it is true -- we really are all 8-year old boys.)

Most seats were already taken, so we asked other class participants if they would mind moving so the four of us could sit in the back row together. From there, it all went downhill so fast:

All this, and the assistants still felt it was a good idea to offer us all a glass of wine. Perhaps they were looking for the final straw that would allow them to give us das boot guilt-free.
Somewhere in there, we did get instruction on how to make some holiday treats and some of us actually did some baking. We also got to take a plate o' treats home. And then we promptly left -- about an hour earlier than the class ended. Not the best class, then again, we weren't the best students. And somehow, it all seemed an appropriate way to end the second successful year of the Dilettante Club.