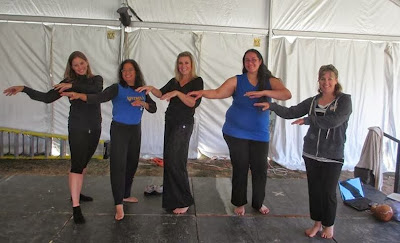 From class, we drove to Matchbox in the Mosaic District of Northern Virginia for some bloody marys and food. And a discussion about how much money with could make with a flaming-bag-of-poop delivery business. (Our financial planner Dilettante Amy's estimate: $5.) I blame Congress.
Posted by Brutalism at 1:14 PM No comments:

August 2013 Activity -- Rifles, Skeets, Traps and Clay Pigeons 101: An Introduction to the Sport of Riflery and Shooting Ranges

I'm not sure about the other Dilettantes, but I'm slightly apprehensive about going to a gun lesson on "Good Luck Road."

This place is operated by the Maryland and National Capitol Parks and Planning Commission and the course provides a comprehensive lesson on basic rifle operation. including balance, precision, aiming and rifle safety while we participate in both skeet and traps and clay shooting.

With a promise of specialized trips into the "field" to look for standing and mobile targets resulting in a day of fun, exhilaration, new skills and new friends -- how could we not do this activity?
Posted by Brutalism at 1:14 PM 2 comments:

Online course, completed Wednesday, July 17, 2013.
https://mydopro.com/videos/continuing-education/
(Scroll down to bottom where it reads "Medicinhe Cabinet Makeover" and click on this video.)
http://mydoterra.com/alankmanning
Cost: Free, plus free samples of essential oils upon completion of the first class.

After more than seven years as a Dilettante, I still think responding to an anonymous Craigslist ad under "classes" is a swell idea.

I'm adorable. Particularly since just this brand of naivete and trustworthiness found us pole dancing in a private basement in Potomac and DJing in a dungeon in Baltimore. Instead of just cutting our losses and realizing this is not the brightest idea, I keep trolling Craigsilst for activities we have not tried. Which means that one of these months the activity will be us getting chopped up into pieces and placed into someone's freezer.

I replied to the ad and the gentleman who replied asked if I was interested in a basic essential oils class or a more advanced class. When I said, "basic" he let me know that "due to everyone's busy schedules, we have decided to use an online format for our classes."

And that, dear readers, is a win-win. A first for the Dilettantes in that we've never done anything online before. And we get to live another day to repeat bad decision-making.

The instructor, Kalli Wilson, taught us how to replace many over-the-counter medications with essential oils.

Posted by Brutalism at 1:12 PM No comments: