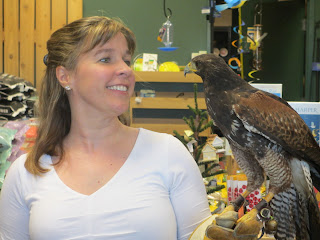 Imagine our surprise when we learned that this class was going to take place inside a store housed in a strip mall, and not outside where birds of prey could actually, you know, fly.

We met for brunch in advance of class at a place called Praline, that was about five shops down from the Wild Bird Center in the strip mall. And somehow, because of gabbing over cappuccinos and some great food, we still managed to be late to the class.

We did get there just in time to hear Mike, the instructor, go on and on about how there was a documentary being created about him and shown at some kind of "Sundance-y film festival" and that he got to travel everywhere because of his falconry including the UAE (which, when no one responded, he then said slowly, "United. Arab. Emirates."). He was quite impressed with himself, though he tried to disguise it with some false self-deprecation. 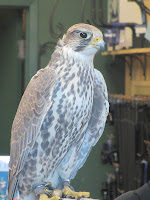 We did get a little bit of information about birds of prey and how to train them, and even though these birds have a greater life expectancy in captivity, we were not all completely sold on the quality vs. quantity of their lives. We were also not completely sold on paying $40 for this lecture, which seems like it is something that should have been given away for free as a store promo. (Particularly since we were standing and/or sitting on bags of bird seed right in the center of the store for the entire thing.)

At the end of the lecture, we did get to have a bird perch on our arm while wearing a protective glove. The bird was on a leash and both birds that we got to see struggled to get away and there was a lot of upside-down flapping. It was a little scary. 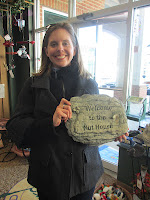 Also scary? After I held the bird, I looked at the glove where she was perched and noticed fresh blood. I notified the instructor who didn't seem at all concerned. He said, "I think it is from the last time we went hunting." Which it was not, because it was fresh blood. Dilettante Amanda suggested that I lick it and then confirm, "It's fresh all right." (Her photo to the right is beginning to make a lot of sense now, huh?)