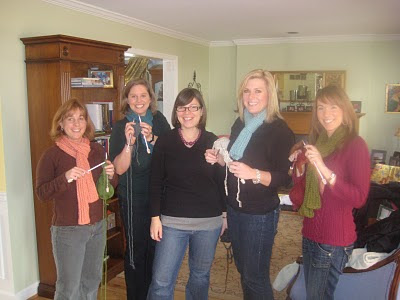 We followed up the activity with lunch and beer ('cept for Nicole, of course...no beer now that a little Dilettante is on its way) at Dogfish Head.
Posted by Brutalism at 12:56 PM

If I understand this correctly, knitting is the gateway activity that may lead the Dilettantes to 1)going to church and 2)threesomes. Well, this could get interesting.

Dear Other Dilettantes: Well, it looks like February and March are decided!

Ironically, all of the Dilettante Clubs' husbands were later found with vampire marks on their lifeless bodies...

What some people call OCD, others would call follow through. Hmph.

And, if Scientology counts, we've been to church, so that just leaves threesomes. Sweet!

Except there are four of us...

You always were better with numbers...

dilettante07 said...
This comment has been removed by the author.
2:01 PM

Thanks for outing us, Amber, I guess I might as well go ahead and post the "tickle fight sleepover" activity that I thought was "too much"...

With all the coughing going on, it's a good thing you now have scarves to wear.

Love the going to church threesomes line and the hilarious comments that ensued.

I'll be checking the mail daily for my complimentary Dilettante Club potholder.