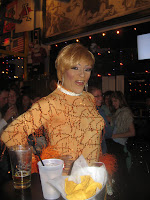 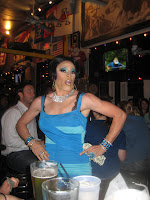 Where to even begin? With Eleanor, the lesbian from Dallas? With the woman from Georgia who did not grasp the concept of BINGO and ran up on stage after getting five in-no-way-connected spots on her score card filled? With the huge table full of employees from the Red Robin in Waldorf who seemed to be regulars? (And who lost an over-imbibing member of their group to the restroom for a good portion of the night?) With the vast array of food and beverage that was available in "bucket 'o" quantities?

Or should we begin with the prize table -- which was quite obviously a table of rejected gifts from Christmases past. It included: a leopard print snuggie, an electronic dartboard, a dirt devil vacuum, a Paula Deen hot chocolate maker, a crock pot, a chia pet, a basketball, a waffle maker and some other completely random stuff. (Seeing the chia pet prompted Dilettante Kathleen to exclaim, "Oh my GOD! I have always wanted a chia pet!" A dream sadly unrealized due to the hefty $7.99 price tag, apparently.)

Actually, let's begin with how the two stunning drag hostesses (Shi-Queeta and I-don't-remember-the-other-woman's-name-so-let's-call-her-Mary-Katherine-because-it's-funny) set the tone of the evening by picking on every single person in the (completely full) bar. The banter was totally lewd and uproariously funny. They were absolutely equal-opportunity offenders and made everyone feel like they were part of the party. (If you go...be prepared to discuss your sexual orientation and whether or not you are a "top" or a "bottom"). And be prepared to be challenged on your answers based on some of your bodily features. Whether you are gay/straight/black/white/male/female or anything in between -- you are going to be stereotyped with an unflattering comparison. (In our crowd, there was a "Sumo Wrestler," a "Shrimp Fried Rice," and a "Velma" from Scooby Doo. Frankly, we got off pretty easy, as we were dubbed simply, "The Real Housewives of New Jersey.") A theme our hostesses returned to again and again by saying things like:

In addition to the bingo, the ladies mixed things up with a lot of crowd participation and contests. Taking a cue from RuPaul's Drag Race, they did a "lip sync for your life" contest. A really cute gentleman that participated did not perform successfully, so Shi-Queeta said to him, "Go sit down, Bottom, you don't even win nuthin'" Later, she said to another rowdy participant, "I'm a drag queen...I will whup yo ass."

Dilettante Amy was chosen for a dance-off with five other people...and easily won the first round elimination. She tapped out in the second round, however, when her opponent began grinding her butt in a stranger's lap. Amy is nothing if not aware of her personal boundaries...she would simply not go there. Literally or figuratively.

Later in the evening, Dilettante Kathleen was selected for a chug-off with five other people. Having no personal boundaries of which she is aware, she easily downed the beer and won the contest -- and an awesome calendar featuring Shi-Queeta herself.

One bawdy, fun, ridiculous night. Quite a perfect swan song for Nicole...who is now on hiatus from the club until she realizes that a few hours away from her newborn every month will be something she looks forward to and comes back into the fold.

The only down side of the evening was that none of us won bingo. Ever. Also, we ate dinner at Nellie's prior to bingo. The food was good...but the service was awful. We found out later it was our waiter's first night, which probably explained most of that...but jeez. Perhaps we should ask Mary Katherine to whup his ass?
Posted by Brutalism at 7:29 PM 6 comments:

Dear Faithful Followers, it is with a heavy heart that we are saying goodbye to one of our original members, Dilettante Nicole. She is having her first baby in June and will be taking some time off to focus on her family
(ha ha ha -- a Dilettante "focusing" -- I kill myself...) We have a ton of great and ridiculous memories and wish her all the best in molding her Dilettante offspring.

We have not yet decided how to fill the void that Nicole will leave. We may have a guest Dilettante every month, we may audition potential new permanent members...we're not sure. What we are sure of is that the Dilettante Club works best with four people and that the fun will continue every month. We have a great lineup of activities planned, starting in May and going through the rest of the year. These include:

Stay tuned!
Posted by Brutalism at 9:55 AM No comments: 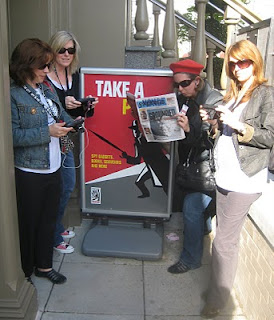 How could your four Mata Hari wannabes Dilettantes not want to participate in an activity described thusly:

Time is ticking… terrorist operation is unfolding in DC…sleeper agents are ready to activate a device that will bring the city to its knees. Can you find the hidden password to deactivate it before the terrorists launch their attack? In the ultimate intelligence game, you will piece together clues and decipher messages that reveal a world of ruthless terrorists and deadly choices. As a Special Security Division (SSD) agent armed with a Geo-COBRA, the latest high tech device issued to counterintelligence field agents, you prowl the streets of DC uncovering secret messages, tracing hidden signals, scanning for fingerprints, and breaking codes. Can you foil the plot? Only your wits and time will tell…

Being good spies, the Dilettantes did their best to blend in...and by that, I mean that Dilettante Kathleen used her pink ear buds and Dilettante Amanda wore a bright red beret.

Our first order of business was to choose spy names. Nicole went with Pilar, Amanda went with Natasha, Amy went with "The Umbrella Maker" and Kathleen went with Brutalism. We received our briefing on how to use our COBRA devices and off we went into the gorgeously sunny DC day, receiving audio and video messages from our contact and also from special agent "catbird." (Our GPS devices also issued each of us a "special code name" when we first logged in. We found out later that EVERY SINGLE ONE OF US was "Tango 009". Not only is that completely not secure and probably what caused us to have an unsuccessful spy mission...it also kinda makes me regret the "Tango 009' tattoo I got.)

The mission was a lot of fun. With the exception of Nicole's GPS device not working after the first five minutes of the activity. That required a call back to HQ to try and get things sorted out, but it was not to be. (Though they did refund her money at the end.) All in all, a fun way to spend an hour an a half on a beautiful sunny day in the city.

Lunch at Teaism followed (after a failed attempt to go to Gordon Biersch -- shocking that so few other people want beer before 11:00am).
Posted by Brutalism at 10:11 AM 2 comments: