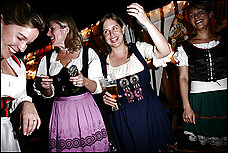 Toward the end of the evening, the party thins out, but a core group remains in the (pseudo) German spirit. A few friends bring out Kathleen's karaoke machine, and Amanda, still wearing her Swiss Miss braids, starts in on Pat Benatar's "Hit Me With Your Best Shot." Then Amanda and her husband, Leon Morse, take an impromptu dip in the pool, followed by Karen, who dives in -- dirty dirndl and all.
Posted by Brutalism at 5:29 PM 5 comments: 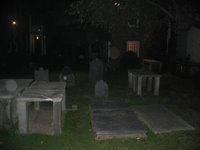 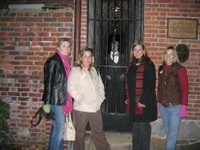 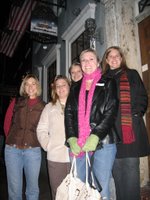 1. Is this an activity where someone would feel comfortable going alone or is it better to go with a partner?
2. Was it convenient to participate in this activity?
3. Was the activity a good value based on the registration fee? Tour was just $10. It was a one-hour walking tour, the evening was a perfect fall evening
4. What were the participant demographics?
5. Logistics
6. What should one wear/bring to the activity for maximum enjoyment?
7. Level of physical fitness required (if applicable) -
8. Should participants be there early to get a good seat? Meet people? Get set up?
9. Size group that could be accommodated (if you wanted to organize a group outing).

We ended the evening at Bilbo Baggins in Old Town. Wow! What a great beer menu. And, the food was fantastic.
Posted by Brutalism at 10:31 AM No comments: