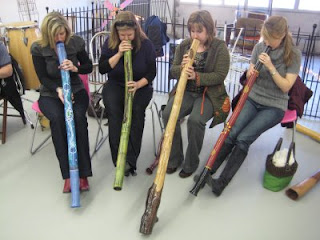 We had lunch after at the Vienna Inn, because really, how else would one follow up didgeridoo?
Posted by Brutalism at 1:38 PM

Hi, there...
What is that? Never seen it in my life... Is it wood? Where is it originally from? Interesting! Makes me want to just fly and join you all. :(

Please pace yourselves Dilettantes. I'm still basking in the glow of your January hip hop class which seems like yesterday.

Another great event for vicarious dilettantes like myself. But why do I have to be the first to mention that the didges look like giant bongs?

Beautiful instruments, by the way. Too large to be everyday fashion accessories, but how good would you look carrying one of these at the Brutalism 5 Year red carpet event and wearing The Shoes?

laughed out loud at the motorboat reference. i "know what you're saying!"

look these up high end replica bags get more you could try these out check this site out dolabuy.co