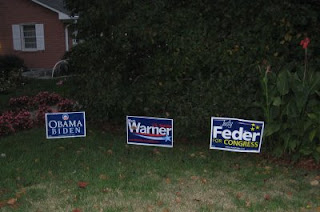 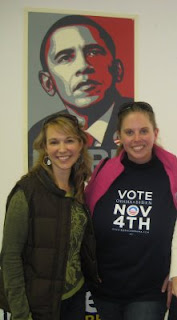 We ended the evening at Stray Cat Cafe over dinner and beers (and hot tea, ahem...) and a discussion about why Barack Obama truly is the Change We Need. Please go to www.barackobama.com for information on his position on issues that are important to you. (And definitely use the tax calculator tool -- it's great.)
Posted by Brutalism at 2:31 PM

Funny--I seem to remember there being two other dilettantes with us. Hmm. Maybe you can photoshop some glamour shots of you and Amy into the shot.

Jesus Lord. I should add another bullet to the dilettante creed about anyone having veto power before a photo gets posted -- those were truly awful pics of Amy and I. And really good ones of you and Nicole. (Prolly cause you're still young and hot and not "middle aged old bags" like us.) Snarf. I also was thinking of photoshopping something in -- that would've been funny.

Great job ladies! That takes guts and I'm glad you didn't run into any bad apples. There are plenty of them on both sides, of course. We just need to agree to disagree about some stuff and fix the rest.

Thanks for using your considerable Dilettante influence in a key swing state!

Hi, Dilettantes! You're so brave, canvassing door-to-door. (I'm too chicken to sell girl scout cookies in my neighborhood.) Thanks for sharing your adventures. Can't wait to see what you try next! :) --Anne

What a worthy activity! You must feel proud to have participated. When you are elderly gals keeping the senior center hoppin', you will fondly talk about your days in 'aught-eight' when you helped steer America's future.