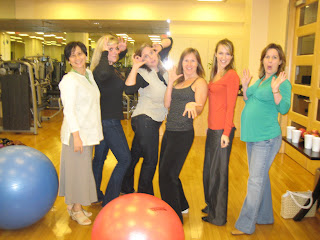 For the second time in Dilettante history, we had a guest dilettante. Amanda's friend from Indonesia (and former member of the Indonesian Parliament -- seriously), Tanti. (Ergo, she will be heretofore known as, "Dilettanti.")

At the Mandarin Oriental Hotel Spa, we were taken into the gym area where we met our instructor, Val. She wasn't big on the warm fuzzies and just jumped right into the class, which was pretty cool. We all sat on Swiss balls facing a mirror for the duration of the class, so that we could watch our posture and our faces as we learned to isolate and work each facial muscle.

Her non-sugar-coated assessment of each of us:

Amanda "Mean Munchkin" Lonsdale: Sounds like she represents the lollipop guild when trying to talk with her tongue in the roof of her mouth (a strengthening exercise). Also, she never smiles and is apparently a total pessimist based on the lengthy "Can't never could" lecture she received after she said that she could not do one of the exercises.

Dilettanti: Has small eyes and bags underneath them. (Which probably has nothing to do with the fact that she's Asian and had recently flown in from Indonesia.)

Kathleen "Crow's Feet" Canedo: Pretty self-explanatory -- although I do prefer "laugh lines" and sue me if I don't worry too much about these and actually kind of like my face advertising that I like to laugh

Nicole "Jowls" Bono: Needs to work on her jawline so that she does not develop flappy jowls down the road. (The dilettante consensus was that Nicole should introduce herself to her new Ashburn neighbors as "Jowls Bono" so they don't mess with her.

Amy "Droopy" Schirmer: Has to open her eyes much bigger and wider so the upper lids don't droop.

She also taught us how to do some everyday things more elegantly. These tips included how to drink properly from a glass and through a straw and how to walk in a more feminine and sexy way (and repeatedly commended Amanda on her superior butt action -- which, combined with her lollipop guild voice probably makes for some interesting encounters for her husband). All of these things help work muscles and improve posture. She mentioned that walking properly would get a lot of construction workers to take notice...funny -- we always thought that a pulse was all that was required.

The hour class stretched into an hour and a half because she was having such a good time. We wrapped up by slapping ourselves silly all over our bodies.

So, some good tips that we can probably implement just by being more aware of them. But also a lot of tips that I cannot see anyone spending a considerable amount of time on...life is just to short and botox is just too available.
Posted by Brutalism at 12:15 PM No comments: 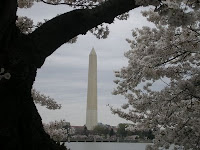 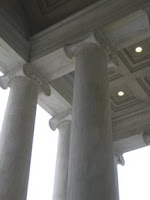 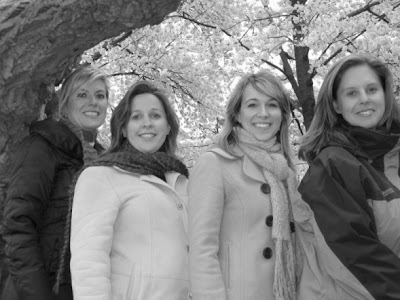