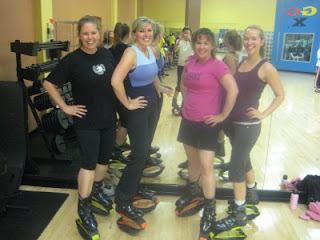 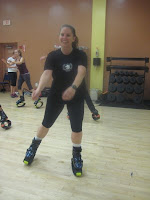 Kangoo Jumps is an aerobics class. That you do while wearing contraptions on your feet that look like a combination of ski boot and springboard.(Because keeping up with the choreography in aerobics has never been challenging enough.) (At least for the "helmet brigade" portion of the Dilettantes...)

Aside from wobbling around like a newborn fawn when first standing up in these boots, we got used to them pretty quickly and had a great time in this class. You cannot be in anything but a good mood when bounding around like a kangaroo in time to great music. (Which is why school dances in the 80s were so much fun.)

You might think that the instructor (think Stockard Channing with white-blonde hair) would take it easy on a class that was about half full (I'm an optimist!) of people who had never been on these contraptions before. Not the case. We went full tilt for the entire hour. There were many moves that were reminiscent of tap dancing...and also some moves that were pulled right from an MC Hammer video. (Why Madonna has not incorporated this into the choreography for her latest tour we may never know.)

And aside from some blistering and chafing where the boots rubbed our legs, we all felt (but did not smell) great after class. The fact that this is low impact made a big difference.

We followed up class with lunch at The Original Steakhouse in Woodbridge. And then a nap.
Posted by Brutalism at 9:43 AM 9 comments: