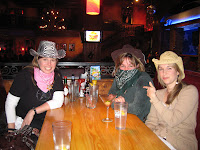 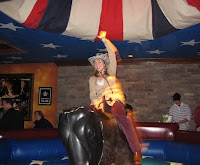 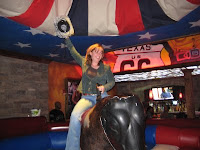 The Dilettantes met up at the Cadillac Ranch at the new National Harbor, bedecked in jeans, boots, massive belt buckles and cowboy hats, pard'ner. We reckoned that the harbor area looked like a ghost town until we went inside and the place was packed. As we waited for Dilettante Amanda (she got a little lost finding the place) we watched a bunch of people ride the mechanical bull (not a euphemism, even though I really, really want it to be). As each person took turns riding, the crowd that had gathered to watch cheered them on and got really into it. We enjoyed a few cocktails as we watched one person after another get tossed onto the ground.

When Amanda arrived, we got a table for dinner. Since we'd had to wait for a table for a while, we decided that we'd eat and then ride the bull. Our table was right next to the bull riding area, so we watched others as we ate until we suddenly noticed that the bull was idle. Apparently, a fuse had blown and the bull was going to be out of commission for at least an hour so it could be repaired.

Our waiter was an interesting chap. He seemed a bit overwhelmed by us and with the waiter gig in general. He didn't know to ask if we wanted additional drinks, and brought the wrong food to the table and just seemed a bit out of his league. At one point, he was reaching behind his back and tugging at something, so Dilettante Kathleen asked, "Do you have a wedgie?" He kind of half-smiled at that and said "no", but also didn't seem particularly embarrassed by the question. He was then known as "Reggie Wedgie" to us.

[She's not one to brag, but Dilettante Kathleen had an admirer at the bar. He was apparently bilingual (slur being the second language) and he had quite the silver tongue. He said to her "When you're up there [on the bull], I'll be bouncing all over the place. I'll be all like, wwwwaaaazzzzzuuupppp?" and then he put his arm around her. Good thing she and her husband are solid, because there are temptations...she's only human, you know.]

Dilettantes Amy and Amanda got in line for their turns to ride the bull, and as they were waiting, the bull broke down again. This time, we decided that we could not wait for it to be repaired, as we had already been there for about four hours.

We all did manage to pose on the bull, even though not all of us got to ride it. And really...isn't the photo op what we're in it for anyway?
Posted by Brutalism at 4:19 PM 5 comments: