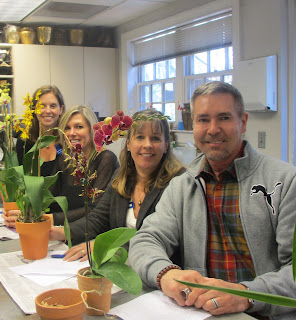 When Dilettante Amy proposed this activity for October, Dilettante Amanda and I had the same reservation: that it sounded like a cute name for an activity that would involve a bunch of women sitting in a circle holding hand mirrors. Which would be particularly awkward since her brother, Steve, was our guest Dilettante for this activity. And because Amy was diagnosed as having a "dry orchid"...

Fortunately, the class description was literal and the workshop did actually aim to help people bring orchids back to life. We were all supposed to show up with an orchid that needed to be resuscitated, but as we are Dilettantes who replace rather than revive orchids, Dilettante Amy stopped by Trader Joe's and purchased four brand spanking new orchids for this class. (For a brilliant blog post on orchids, read this.)
﻿
The instructor was surprisingly young and passionate, and he made this class very interesting for both the botanists and non-orchid fanatics among us (read: the Dilettantes). Pretty much everyone else that showed up for this class on a Saturday morning was pretty invested. Which became obvious when the instructor told us that many people move their orchids into the bathroom in the evening and leave the lights on all night to keep them thriving, and that if we wanted our orchids to be healthy, we had to fertilize them differently during growth and bloom phases. Apparently he did not realize that I sometimes forget to eat breakfast and recently left the (indoor) cat I adore outside for several hours before he meowed and scratched at the door to remind me he was out there. (Oops). 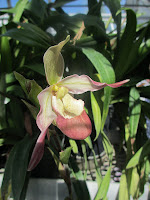 Other interesting things we learned: it helps to sterilize cutting tools with a blow torch to prevent infections from spreading among orchids; that ice orchids are a marketing gimmick; and that many orchids can grow on trees and rocks, fertilized only by rain and monkey poop. (Which is when Guest Dilettante Steve noted, "Oh great. Now I'll have to get a monkey.")

We learned the difference between monopodial and sympodial orchids, how to water and fertilize all types, and that the cat-to-orchid ratio of our classmates was probably pretty high. 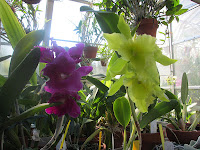 The instructor also used the words "turgid", "moist", and "spagma" moss. And for those of us whose orchid is not dry and is fully in bloom (huffs on closed fist, rubs against chest), that kind of talk is simply unnecessary. The class ended with one man whispering, "I hate to mention it...but "mealy bugs." Which was frankly, pretty offensive. Not because of the mealy bug reference, but because it was not really a sentence and also because it was half an hour after the class was supposed to end.

We ended our day with a delightful brunch at Ardeo on Connecticut Avenue and a pear tart for our birthday tart: