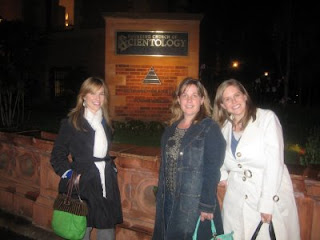 Our tour guide would have stayed for many more hours answering questions (it was close to 11:00pm), but we had to get to our parking garage before it closed. Of course, we all came up with a million additional questions as we were driving home. There really is a lot to ask and a lot we still want to know. Primarily about how we can start our own religion. That is some pretty schweet real estate these people own in Dupont.
Posted by Brutalism at 10:55 AM

This is an incredibly stupid and life-threatening idea.

this is gonna be good. can't wait to read about it! you girls behave.

I've been anxiously awaiting this post--excellent summary of one crazy place!

Dear Amber -- and yet...it did not begin to do it justice. Definitely one of our more interesting activities...

You left out the part about the rooms being climate controlled.

Oh yeah--and how the people at ground zero were detoxed thorugh a regime of niacin, 20 minutes on a treadmill, and 5 hours in the sauna. Miraculous! If you don't die in the sauna that is...

And for "anonymous"...he spent a good deal of time in Guam.

I had a feeling I might know the identity of anonymous...

Good points, Dilettante07 -- the creepy cold/dark rooms and the fact that all rooms off the hallway had closed doors. That was odd. And the hallways were so spartan. Eerie place, that.

Dilettante Kathleen is a total idiot who within three seconds of arriving called both Amanda and Amy by their real names. Oops. buy cushion covers online , ac comforter king size ,