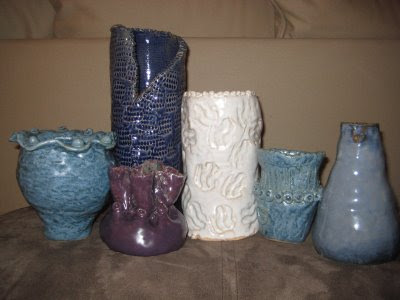 "Jump Start to Ceramics" was aptly named. The instructor appeared to be a bit over-caffeinated. (We each received four e-mail reminders that we had registered for class, and a voice mail reminder for good measure. Also, she began the class about 10 minutes earlier than the posted start time, and with only a handful of students there).

We know this because Amy told us. She was there when class began. Amanda had to play catch up when she arrived at 9:59. Nicole and Kathleen, on the other hand, stupidly followed MapQuest directions that had not taken all of the new road construction into account. After missing their exit and turning around after getting off at the next possible exit, they sat in traffic for an hour and a half coming back over the Wilson Bridge.

There were about 20 people around the clay tables happily slapping and molding their clay into platters, bowls, wine bricks, small pots, ant hills (it's in the eye of the beholder, Amanda), and ash trays (this was a nod to the clay projects of Kathleen's youth and to her excellent parenting example).

The studio space was very cool -- this was held in an annex for the Torpedo Factory. And the class was really a bargain -- the $40 covered the 2 1/2 hours of studio time and instruction, all materials, and the glazing and firing of as many pieces as we could create during our class time. (Ranged from 1-3 pieces for each of the Dilettantes.) We all selected the glaze color we wanted for each piece and will pick up our projects in 2-3 weeks when they are complete (and likely after several hundred reminder calls). Completed project photos will be posted when we receive those.

The class ended with a tour of the studio space and classrooms. We hear.

The Dilettantes headed to Rustico for lunch, beer and de-briefing. And our (now) traditional December toast to this fantastic club that has been going strong for three full years. We have lots more exciting activities planned for 2009 (as well as a supplemental Dilettante Activity or two -- )
Posted by Brutalism at 10:32 AM

When you get done you should head up to the Royal Restaurant for their breakfast buffet. That or you can head across the street for and play tennis. Oh, the possibilities!

They're both near the Arts League. I suppose you could stagger down to the Fish Market and see when they start serving schooners of bad beer. Oh, to be a dilettante, where all the world is replete with possiblities.

What the hell is that thing on the right?

That's my ant hill! Although it looks like something weird happened to the top.

Either way, you're totally jealous.