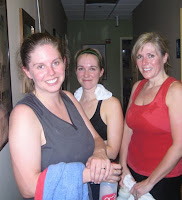 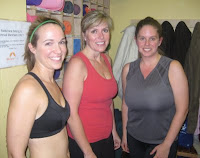 From the Reston Yoga web site: Bikram Yoga is a series of 26-postures completed in an order specifically designed to provide optimal health and longevity. Classes are 90 minutes long and are conducted in a room heated to about 105 to 110 degrees Fahrenheit to warm up the whole body,to work the body deep into muscles, tendons and ligaments and change/regenerate the body from the inside out. The class is designed for all levels-first-time students and experienced practitioners alike!

You pretty much need a yoga class after dealing with the traffic and trying to find this studio tucked in the back of an office park. And we also found out that they are sticklers about doors being shut the nano-second that class began. Amy arrived at 6:05 and was locked out of the building. So, she had to turn right around and fight traffic again in the other direction.

The studio itself is really nice and there were a lot of people there who looked like they did Bikram yoga about a hundred times a week. This stuff must work!

I think we all knew we were in a bit of trouble when even the initial breathing exercises were presenting a bit of a challenge. (Who can breathe in that deeply? Especially in a 110 degree room?) However, as we got into the poses and warmed up (heh) we were all doing pretty well. (Well, Nicole was, anyway. I know we weren't supposed to be watching other people, but she was in front of me and she did great.) I could see that Amanda was also able to keep up with most of the poses and stay balanced. Me? Could not really do any bending of or sitting on my knees...so that made several of the poses all but impossible.

The biggest challenge for the Dilettantes was probably the fact that there is no talking allowed in the room for the duration of the class. I don't know that we have ever shown such restraint and rule abiding as we did for these 90 minutes (especially because at one point, the instructor said something about how a pose helped your colon). (Virtual golf clap for the dilettantes.)

One area in which we shined was the Savasana pose (laying on your back and breathing). Another area was literally in shining. We, along with everyone else in the class, were dripping huge beads of sweat within about 15 minutes of the class beginning.

I don't know if we've ever been happier to have an activity end -- Bikram kicked our collective dilettante ass. The end of class was made even sweeter when we received a cold lavendar cloth from the instructor. We could have kissed her.

We decided to forgo the going out after part of Dilettante Club -- you'll see why when you look at the "After" photo above.

Namaste!
Posted by Brutalism at 2:38 PM

Great review. Bikram is the toughest training I've ever done, harder than rowing, wrestling, and hockey.