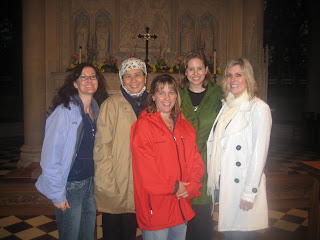 
﻿
﻿
﻿﻿We knew it would be an interesting activity when we figured that no one else would be insane enough to show up for this outside tour in the worst downpour we have seen in ages. Yet, when we arrived, we found 20 other crazies who had showed up in monsoon weather and Dilettante Amanda recognized the tour leader as one of the crazies from her bus. (Actually...in Amanda's world...everyone is "crazy"...)
The tour guide mentioned that in the three years he had been leading this tour, this was by far the worst weather he had ever dealt with. Score! (Upside: With the rain splashing the bottom of our pant legs, we totally looked like we were sporting Hombre jeans. We are ridiculously cool.)
(Interestingly, one of the men in our group was wearing a baseball cap that had "National Pneumonia Day" embroidered across the front. We were not sure which side of the issue he was on - for or against - but it seemed like an awfully good day to contract it, if that's what he was going for.)

﻿﻿﻿﻿﻿﻿﻿﻿We had TWO guest dilettantes for this outing. Returning-Guest-Dilettante-all-the-way-from-Indonesia Tanti ("Dilettanti") and new-guest-Dilettante-all-the-way-from-my-Oakton-cul-de-sac Lisa.
Highlights of the tour:
We did get a ton of great information from our tour guide and learned stories behind all of the different sculptors and carvers involved in creating this gorgeous cathedral (with an intense, almost stalker-like focus on Constantine some-last-name-that-sounds-like-syphilis). Construction on the Cathedral was begun in 1907, had to stop three times (World Wars I and II; the Great Depression) and was finished in 1990. There are still some finishing touches being done (stained glass, mosaic work) and it is truly breathtaking.
Dinner at Two Amys pizzeria followed. Of the five of us, only Lisa and I were drinking, as we were not part of Club PMT (pregnant, Muslim, in Training...)
While researching libations, Lisa and I found the wine descriptions amusing...one wine was described as "brawny and self-restrained." As it is tough to decide between that and the "jocular, approachable" varietal, she asked the waiter for a recommendation. He was slightly built and joked that he would go for the "brawny and self-restrained" wine as it was most like him. We laughed. We laughed again (through our tears) as we realized the "self-restrained" part was also not true. He had flatulence at least two times﻿ while visiting our table.
Fun and soggy night made all the more fun by our Guesties.
﻿
﻿

Don't forget the smooth, round helmet of the Darth Vader gargoyle.

I completely forgot that part of the description. I see that you, however, did not...

Good to be back with all the dilettantes doing this but yes, it was insane enough even for Indonesian who used to monsoon season...!
When we were trying to see all the carves and gargoyles up at the top of the cathedral, it is like facing up directly to the rain and hard to see them clearly.
Thank you all!

Oh great--I'm going to get it from my bus friend now that you made fun of his lover, Constantine Syphilis. Thanks.

Tanti - Great to see you again. We (and by "we" I mean "Amanda") sure knows how to show you a good time, doesn't she?

Tante - You will have a new bestie on the bus. Lucky.

Sarah - Did not see the moon rock. I will go again at some point when the weather is nicer because it was such an interesting tour. Enjoy it!

Darth Vader in a church, that just screams class! Old Europe has nothing on us!!