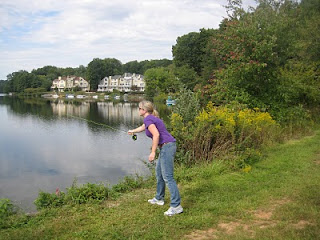 Here’s a little free advice: If you ever go camping with a Dilettante, have a Plan B when it comes to dinner if Plan A is “we’ll eat what we catch.”

After two hours of fly fishing, none of the Dilettantes (or Guest Dilettante Chris) had caught anything. Other than twigs. And probably poison sumac.

This was no reflection on our instructor - a character (in the best possible sense) named Rob Snowhite. (Who upon his first cast into the water, promptly landed a large-mouth bass.)

We had no idea what to make of this guy at first…a young guy who likened himself to Brad Pitt (though we all thought more Luke Wilson) who told us that he had been a biology teacher, worked for a big consulting firm and was now fly fishing as a full time job. And that his wife was a spy. And that he lived in his car at one point in South Park, Colorado, where he was almost eaten by a mountain lion. And in order to remember important things, he simply rolled up a pant leg and jotted notes on his skin with a Sharpie. Added to this were the fact that he liked good beer and the fact that he used the term "Nantucket Sleighride." (Which sounded like an Urban Dictionary entry to us. He used it to mean catching a fish so large that it can actually pull your boat, though to our credit...there are some alternate and more amusing definitions in Urban Dictionary.) 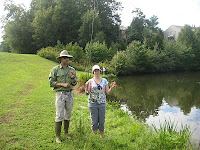 We began our two-hour fly fishing instruction by learning the equipment. He showed us a 10-foot rod (snicker) and its butt (snicker). Rob also showed us and explained the many different types of flies and the types of fishing for which they are used. Some of these he had made, and some he had bought (meaning, they were made by Sri Lankan children).
After our tutorial, we all spaced out along the shoreline (literally and figuratively) and began casting. Guest Dilettante Chris came close to landing a fish (though she and our instructor had different opinions of how large the fish actually was). Dilettante Amanda succeeded in catching her sweatshirt (which will be delightful mounted above her fireplace).


Dilettante Amy succeeded in getting bored at the 50-minute mark (her trademark), though she stuck it out to the bitter end.

It was a gorgeous day and we really enjoyed ourselves even though nothing was biting (yes...that's it. Nothing was biting). There was a lot less nonsense than usual since we had to stand so far apart. (I guess our elementary school teachers knew what they were doing when they separated the troublemakers.) 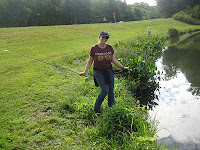 Lunch at Jackson’s Mighty Fine Food in the Reston Town Center followed, where we were met by Dilettante Nicole and her baby, Lucas. 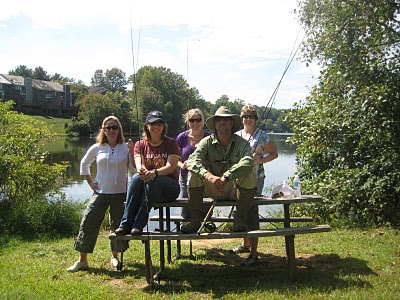 can't wait to hear the results of your August and September activities. it was very nice to meet you and briefly hear about your amazing Dilettante Club while attending BlogHer. I love the concept.
Laura

Hi, Laura - Good to meet you, too! Thanks for visiting the site.

Seriously, you can fly fish in Reston? Sheesh. Don't tell my dad. We'd never get him out of there.