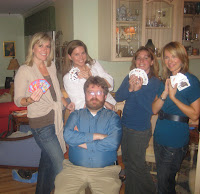 You really have to hand it to our bridge instructor, John (get it? hand? like a card hand? I'll pause while the hilarity ensues...) He has been playing bridge for 20 years and attempted to teach us in 2 1/2 hours what he normally takes eight weeks to teach his beginning bridge students. His goal for the night was to teach us just enough to be able to decipher the bridge column in the Washington Post.

Using the Standard American Bidding system (and probably 100% of his patience reserves), John taught us some bridge basics (using Disney and Dog Breed cards -- thanks to Dilettante Amy.)

We learned the point values assigned to certain cards, how the suits ranked, how to make contracts, the rules for opener, what trump and notrump mean, and how to determine the longest suit while playing a few practice hands. (Dilettante Kathleen managed to get some awesome cards during the first two hands, so she just sat back while Dummy (it's a bridge term -- I swear!) Nicole did all the work. Amy manged to pull a couple of bad hands, so every time it was her turn, she simply retreated into a fetal position with her head on the table.

There is a lot to know about bridge rules and terminology, and a lot of strategy. It is a little overwhelming to the novice. Especially the novice with a short attention span. However, there is also just enough colorful bridge language to keep things fun. To wit:
And Dilettante Kathleen's favorite:
John obviously knew his stuff and in spite of ourselves, I think we actually learned something. At the end of our activity, we went through the Washington Post bridge column and understood some of it. Mission accomplished.

No de-brief was necessary as we enjoyed some pizza and beer while we played cards. Pretty efficient, huh?
Posted by Brutalism at 1:20 PM

But,you forgot to mention that I tried to infect everyone with swine flu. That was really the highlight of the evening.

You're a giver, 07! Hope you're feeling better.

Irene -- That and square dancing, eh? Bridge was HARD.