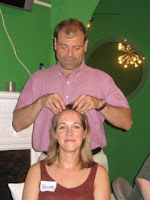 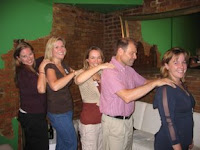 Not since the pole dancing class in April 2006 have the Dilettante spouses been so excited about an activity.

The class was held at the Felix Lounge in Adams Morgan -- so, plenty of time for beer before the class began. Hooray! (Though, we were not instilled with confidence when the bartender told Amanda that sometimes the instructors for Pros in the City classes don't show up. Fortunately, this one did.)

He had all of us introduce ourselves and talk about our experience with massages -- whether we had them often, for relaxation or injuries, and if we'd had good or bad experiences with them. Then, he came up with all the following sound bites:

"I have the table, the sheets and the cream"

"When I'm giving a massage, I take a moment to check in with myself -- to be present not just with Ken (participant), but also with Ken's shoulders"

"Once I put my hands on somebody, I tend to not like taking them off"

"When I teach this class in the winter, there are too many clothes...skin is so much better"

"Apparently, she's one of the fingernail ones" (said about Nicole)

"You can use the cream or not, some people don't like to get all gooed up"

Instruction sheet had commands such as:
"Now change places" and "Now switch roles again" -- sheesh! You'd think we were at a swingers' club (yes -- it took me almost 19 months to work "swinging" into this blog -- talk about restraint!)

If there was ever a question about just how juvenile your dilettantes are -- that question was answered repeatedly during this activity. To wit:

a) During his discussion, Joseph mentioned that sometimes people get very relaxed and sometimes fall asleep during massages, which can be jarring when you wake up and realize it's over. To which we added, "yes, and you realize your kidneys are gone and it hurts in the no-no place."

b) One dilettante noted with hilarity that every time she moved on the vinyl couch, it sounded like she was passing wind, so she proceeded to do it about 15 times while saying "couch" every time just to make sure that no one thought that she was, indeed, REALLY passing wind.

c) All dilettantes coming up with the same third-grade joke about "what's this?" "a brain sucker" "what's it doing?" "starving" when we were demonstrating scalp massage on our partners.

Fun event. The instructor was very laid-back and didn't seem to mind when we went to get beers during class. Only slightly uncomfortable part of the evening was getting hit on (as a group) by two different guys at the end of the class. Even after mentioning that we were married during the introductions. Perhaps this was a swingers' massage class. (I broke the seal...two swinger references in one posting...I can't help myself.)
Posted by Brutalism at 9:56 AM