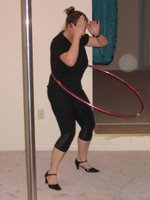 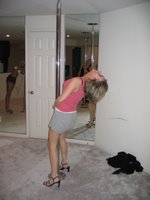 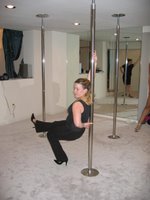 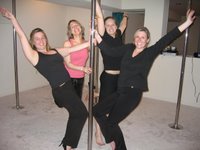 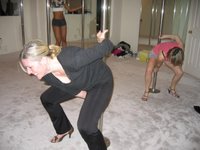 I have a whole new respect for strippers. And I had a pretty healthy respect for them to begin with. This pole dancing thing is not easy. As my mom used to say, "if it was easy, everyone would do it." Although, I don't think she was referring to pole dancing at the time.
Our instructor was a gorgeous woman named "Ki". We all admitted later that we spent an inordinate amount of time staring at her butt -- and we're all straight. The woman had a body that would not quit and she was a great dancer.

We warmed up with a little hula hooping. Amanda "Hips" Lonsdale and Nicole "Swivel" Bono showed their stuff, both claiming to have never done this before. Whatever...Amy and I couldn't really get the hang of it, even though my mother won the "best hula hooper in the world" contest back in high school. (Don't be too impressed -- the world was a lot smaller then.)
After that, we practiced our "walk" around the pole. This involved a lot of strutting and a lot of rhythm.
We learned different ways to move down the pole, including the "fireman", the "fairy", and some other moves. This required all kinds of arm strength, rhythm and learning to time how to snatch the ones out of our garter belts while keeping in step with the music. (Kidding. Mostly.)
This was definitely the hardest workout I've had while wearing high heels (that I'd share in a blog, anyway.)
Posted by Brutalism at 4:39 PM

I love that you fit the word "snatch" in here. Also, I've heard hula hoops will be at your mother's wedding reception. Or was that the ceremony?