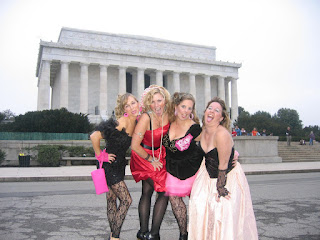 This started as an idea to celebrate a couple of milestone birthdays this year and quickly grew into Dilettante Prom 2007 -- complete with a theme, colors, costuming and a "killer" agenda:

Date: March 24, 2007
Theme: Forever Young (but of course)
Prom colors: Turquoise and hot pink
Prom Night Agenda:
-Girls get ready at Dilettante Amy's house
-Boys meet us and we take a limo ride around DC for two hours
-Limo drops us at Applebee's in Falls Church
-From dinner, we walk to the State Theatre and see The Legwarmers

During our limo ride (with Lonnie the limo driver) in the District, we stopped at The Tombs (where a bunch of Georgetown students were all over us) and an Irish bar (where Dilettante Amanda got to meet one of Leon's friends from the grand jury for the first time -- while dressed like a punk rocker). We also stopped for photo ops at the fountain in Dupont Circle where a passerby said, "I metaphorically hug each and every one of you." Dan, who was dressed like an 80s hair band member was accosted by a group of Japanese tourists who wanted their pictures with him.

From there, we headed to Applebee's. Either we'd had a few too many cocktails or the food at Applebee's has improved since we last ate there in 1990, because we all found it delcious. (And Dilettante Kathleen cracked herself up all night long by asking the Applebee's waiter how the chef recommended the steak be cooked.)

At the Legwarmers concert, we danced and sang and drank some kind of cocktail they were featuring that had a dirty name. And I took a picture with a guy who had a mohawk. (Awww....just like my own senior prom.)

Posted by Brutalism at 2:08 PM